I Fell in Love With a Beautiful Highway

Time to get back to Joe Dever's Freeway Warrior series. If my attempt at the first book had gone more successfully, it would have ended with the convoy reaching the relative safety of the fortified city of Big Spring, and my character failing to prevent the abduction of love interest Kate Norton by a biker gang. Book  2, Slaughter Mountain Run (except when published in the USA, where it lost the 'Slaughter' despite the fact that there's an actual Slaughter Mountain in the region of America where the book is set) picks up the plot a little while later, by which time the bikers have joined forces with the Lions, the gang whose leader wants revenge on me for killing his brother. A little eavesdropping on their not-as-secure-as-they-think radio communications has revealed that, having failed to breach Big Spring's defences, the Lions are planning on forming an alliance with other gangs, and Mad Dog Michigan, their leader, has taken a couple of hundred bikers to San Angelo to try and make a deal with the leader of the gang that's in control there.

With relatively small numbers of the enemy still encamped outside the city, and reinforcements on the way, this looks like the best time to try and breakout and resume our journey to California, so plans are being made. I'm making additional plans of my own, based on the assumption that this time round Kate's not likely to be able to escape from the Lions without help. And the only help she's liable to get has

Close Combat Skill: 19
Endurance: 25
Driving: 4
Shooting: 4
Field craft: 3
Stealth: 4
Perception: 4
If I'd survived book 1, I'd have 4 extra points to distribute among the latter 5 attributes. Lacking that boost will doubtless make my already slim chances dwindle further, but such is life. Actually, just out of curiosity, I'm going to keep separate records for a hypothetical veteran of the first book and see if he would actually last any longer. (Field craft up to 4, Driving, Stealth and Perception up to 5).

We make our preparations under cover of darkness, the signal is given, and the breakout commences. The gang members on guard have built a barricade out of old cars around half a mile down the road, but the lead truck just smashes straight through it. Pretty shoddy workmanship, considering that they know they'll be executed if they let us escape.

A small surprise has been prepared on the other side: at the top of the steep embankment at the side of the road is a battered truck, held in place there by concrete blocks in front of the wheels. A couple of the bikers are rushing to try and remove the blocks, and guess who's just driving through the gap in the barricade when they succeed? I floor the accelerator and, by the kind of coincidence beloved of overly competitive GMs, the truck just happens to hit some debris that deflects it into my path. Still, there's only a 10% chance of my failing the roll to steer out of the way.

Funny thing is, it was a 1 in 10 chance of failure that did for my character in book 2 of Joe Dever's Lone Wolf series, too. Yep, I crash and burn. 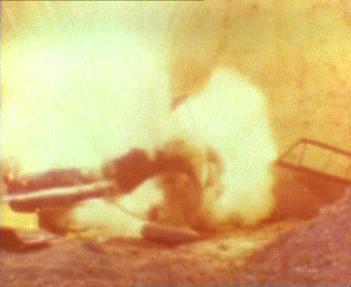 My character's surname may be Phoenix, but he won't be rising from these flames any time soon.

Meanwhile, my hypothetical wasn't-wiped-out-by-a-lousy-roll-in-book-1 counterpart manages to swerve out of the way and, presumably, goes on to complete this book, so he can sit and laugh at my increasingly probable failure to survive book 3 several months from now.

Accompanying me on my quest