Over ten years ago, either before I properly got back into gamebooks or while I was focused on rebuilding my FF collection, I popped into one of the charity shops on Chanterlands Avenue for a browse, and noticed a gamebook based on the computer game Lemmings. I may have given it a brief look, but I didn't buy it, despite having enjoyed the game on a housemate's computer the year after I graduated.

What little I remember about actually deciding to get the Lemmings Adventure Gamebooks some time later will be covered when I get around to the second book in the series (it's surprising how often I wound up getting book 2 of a series before book 1). But once I'd decided to give the series a try (in a fairly abstract sense, considering that I've not yet attempted to play either of them), I tracked down the first book, Nigel Gross and Jon Sutherland's The Genesis Quest, on eBay.

The premise is pretty straightforward. There are eight sub-quests, each to recover a piece of the broken medallion that, when repaired, will reunite the differing Lemming tribes. I start with 50 Lemmings of various types (picking them from a list) and attempt each sub-quest in turn. Some Lemmings will inevitably be lost along the way, but I get reinforcements every time I successfully complete a sub-quest. Failure is most likely (perhaps even always) going to result from not having enough Lemmings of the correct type. Bearing in mind that one of the co-authors went on to write Fantom Empires, which actively disincentivised the creation of balanced characters, it wouldn't surprise me to find that this book requires large groups of certain types of Lemming, and few or none of others, but time will tell.

The adventure starts with one of the most blatant examples of section number-padding I've ever seen, as section 1 basically says, 'this is the start of the adventure, now turn to the hub section to make an actual decision'. At the hub, I choose which zone to visit first (and, presuming success there, which to visit next and so on until I've beaten all eight or failed miserably). No idea whether or not there's an optimal order in which to visit them, so I'll start with the first one on the list: the Medieval Zone.

Time to pick my Lemmings. I'll take 10 Builders, 8 each of Miners, Ropers and Archers, 5 each of Throwers and Runners, and 2 each of Jumpers, Musicians and Bashers. The Herdsman arrives to bring them under control, and it's time to go. As the Medallion fragment is said to be in the dungeons of the castle on the other side of the forest, heading for the woods looks a smarter choice than heading for the hills.

After a while, there's a river up ahead, with a bridge across it. The Troll Bridge, to be precise, and the Troll may object to having a horde of Lemmings crossing it. Can my Builders create an alternate bridge? That's not an option. Instead, the party finds a shallow part of the stream and, having more than the required number of Ropers, they make it across with no casualties. I'm not sure what the Ropers did there, as the book doesn't go into any detail, but never mind.

The path through the forest forks. The Lemmings go right, then left at the next fork, then right again. The next choice is between south and west, which is something of an arbitrary change of terms, and the lack of compass directions prior to this section makes it impossible to make a reasoned decision. Try south. Thorn bushes flank the path so, to avoid casualties, the Lemmings turn back and reach a different clearing with exits south-west and south-east. South-west is mid-way between the last couple of directions. And leads to another left-or-right choice. Left, then right, and they're back at that clearing. South-east, then... and that goes back to the first one with compass-based directions. And the path keeps looping back to places I've already been, so I'm not going to bother listing directions any more. Just have to face the thorns next time I get back there, because nothing else seems to work. No danger from the thorns, as it turns out, but it just leads to another junction. I only recognise one of the section numbers, so I try the other... Out at last.

So they've reached the castle. It has a foul-smelling moat and a rotting drawbridge. This time the Builders are able to provide a safe way across the water. The Headman selects one of the piles of rubble in the courtyard and sends the Miners in. Soon there's a tunnel leading straight to the Medallion fragment. And the Dragon guarding it. Good thing I brought a couple of Musicians. They play so appallingly that the Dragon flees, unable to bear the noise. One fragment found, no Lemmings lost.

Back to the hub, and thence to the Shadow Zone. I have to trade in most of the original original Lemming squad, as Archers are the only Lemming type common to both zones. Thanks to the zone completion bonus, I can pick 10 Flame Throwers, 8 Parachutes and Climbers, 5 Attractors, Shimmiers, Glue Pourers, Fencers and Archers, and 4 Hoppers.

They have to go through another maze. Oh joy. This one changes its layout on a regular basis, and is extremely dark. Are we having fun yet? I'm not listing directions this time, because there's no point. After a while the Lemmings reach a blockage composed of combustible-looking rubble. Flame Thrower 1 gets rid of it, but is now out of fuel. Beyond it is more maze. Lots more headache-inducing blundering around ensues. For a while I try drawing a section number map, but even that is of little help. 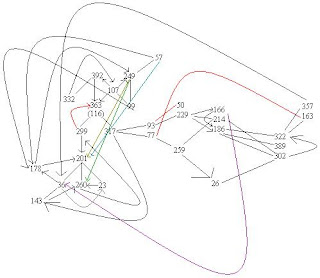 It looked like this by the time I gave up on it.

Eventually I find the rubble that actually conceals the exit. There are flashing lights in the distance. Shadow Lemmings like the dark, so heading for the light seems unwise. But the other way leads to the edge of a presumably bottomless pit, so they have to approach the lights after all. And the lights turn out to be the eyes of a Shadow Monster.

On the combat that ensues, I get 8 points for unused Flame Throwers, 2½ points for my Archers, 0 points for Bombers because I was never given the option of taking Bombers into this zone, and 10 points for the others. Fractions round down, so I have a total of 20. I need to add this to the number rolled on one dice (sic.) and hope for a total above 10. Not tricky. The monster is defeated.

Steps lead down, but there's a barrel close by, so that should be investigated first. It has a tap on the side. Is the tap a trap? Well, I shan't be having the Lemmings turn it on, because I can work out what the partially legible sign on the side of the barrel says (highlight it to see what I think the missing letters are, if you're no good at this sort of puzzle): CAUTION INFLAMMABLE.

Down the stairs, then. And there's another distant light. The Lemmings don't approach that one, either. They reach another hole, and I'm asked if I have a Roper. Ropers aren't available in this zone, either. I was told I had to trade in the ones I had. Lacking what it is impossible for me to have, I must roll to see what happens. The Lemmings make it across safely. They're able to edge round the next couple of pits, prompting a pun that the authors admit is way too obscure - if anyone out here gets the reference to the 'Outline Test' and can explain, please do.

There's rubble on top of the Medallion fragment. I need a functioning Flame Thrower. Given that the rules for the fight didn't specify that Flame Throwers were using fuel (though I have no idea what they were doing if they weren't), and I could in any case have won the fight without counting the Flame Throwers among the combatants, plus the fact that I would rather punch myself in the head than replay this zone, I'm arguing that I do still have one.

And the text mockingly hints that I was more of a liability than a help to the Lemmings here. Right. That's it. I've endured slapdash maze design. I've put up with the text asking me for things the rules didn't permit me to have. But if the authors are going to insult me as well, I'm not prepared to waste any more time reading their rotten book.
Posted by Ed Jolley at 17:54

Accompanying me on my quest